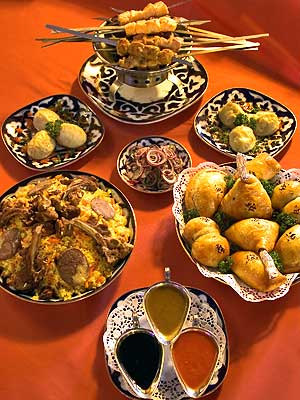 In a nation where "hospitality is rated higher than courage", it is not surprising that the cuisine is bountiful. From the days of the Silk Road caravans, the meal laid out for a guest was never simple or plain fare - every inch of the table was covered with delicacies, enough for several helpings, and the bonds created over those meals often became lasting friendships.

Uzbek cuisine is influenced by local agriculture, as in most nations. There is a great deal of grain farming in Uzbekistan, so breads and noodles are of importance and uzbek cuisine has been characterized as noodle-rich. Mutton is a popular variety of meat due to the abundance of sheep in the country and it is part of various uzbek dishes.

Uzbekistan's signature dish is palov (plov or osh), a main course typically made with rice, pieces of meat, and grated carrots and onions. Oshi nahor, or morning plov, is served in the early morning (between 6 and 9 am) to large gatherings of guests, typically as part of an ongoing wedding celebration. Other notable national dishes include: shurpa (shurva or shorva), a soup made of large pieces of fatty meat (usually mutton) and fresh vegetables; norin and lagman, noodle-based dishes that may be served as a Soup or a main course; manti, chuchvara, and somsa, stuffed pockets of dough served as an appetizer or a main course; dimlama (a meat and vegetable stew) and various kebabs, usually served as a main course.

Among the other dishes that you will enjoy in Uzbekistan are traditional breads baked in tandoors (clay ovens), delicious soups flavored with various herbs and spices, unique stuffed pastries, and an abundance of fresh fruit.

Green tea is the national hot beverage taken throughout the day; teahouses (chaikhanas) are of cultural importance. The more usual black tea is preferred in Tashkent, both green and black teas are typically taken without milk or sugar. Tea always accompanies a meal, but it is also a drink of hospitality, automatically offered green or black to every guest. Ayran, a chilled yogurt drink, is popular in summer, but does not replace hot tea.

If the bazaar is the place where one can find out the latest news, the chaikhana is the place to discuss it in depth. These tea houses, preferably situated near a stream of clear water, with a central samovar to hold the tea, and low tables on mats for the guests to sit around, are the perfect place for men to discuss just about anything. It is at the chaikhana that men will cook up a pilaf, between endless cups of green tea, and also reach important decisions about the next project for the mahallya.

The use of alcohol is less widespread than in the west, but wine is comparatively popular for a muslim nation as Uzbekistan is largely secular. Uzbekistan has 14 wineries, the oldest and most famous being the Khovrenko winery in Samarkand (est. 1927). The Samarkand winery produces a range of dessert wines from local grape varieties: gulyakandoz, shirin, aleatiko, and kabernet likernoe (literally cabernet dessert wine in Russian). Uzbek wines have received international awards and are exported to Russia and other countries.

The choice of desserts in Bukharan jewish and uzbek cuisines are limited. A typical festive meal ends with fruit or a compote of fresh or dried fruit, followed bynuts and halvah with green tea. A Bukharan jewish specialty for guests on a shabbat afternoon is chai kaymoki - green tea mixed, contrary to the standard uzbek practice, with a generous measure of milk (in 1:1 proportions) and a tablespoon of butter in the teapot. The Tea is sometimes sprinkled with chopped almonds or walnuts before serving.